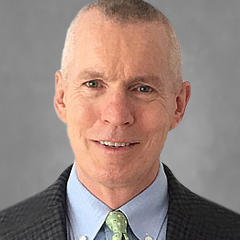 Ed was born and raised in Boston, Massachusetts. He is the fifth of eight children, seven of them sons.

He graduated from the College of the Holy Cross in 1982 with a Bachelor of Arts degree. He played football and rugby at Holy Cross. Following graduation Ed spent ten years working in the commercial real estate business in New York City focusing primarily on tenant representation.

Ed made a career change in 1993 when he accepted a position at JP Morgan Securities as a fixed income salesman. The past twenty-five years he has been employed as an institutional salesman in high yield and distressed securities. His customer base includes mutual funds, insurance companies and hedge funds. He currently works for Robert W. Baird & Company and has been with the firm for the last five years.

Ed is the father of three sons. His two oldest boys, Eric and Brian live and work in the New York metropolitan area. His third son Michael is a special needs young adult. Ed has been significantly involved in the special needs community for the past twenty years. His passion for the OVI mission drew him to relocate to Hilton Head in 2017 so he could play a more active role in the development of Osprey Village.